The imposing basilica is the symbol of the city with its dome that can be seen from a distance. One of the most important churches in the Christian world for keeping the relic of the Precious Blood of Christ, its history started at the foot of the Cross where the roman soldier Longinus picked up a bit of soil soaked in the blood of Jesus, became a Christian and after roaming around for years finally came to Mantua in 37 A.D. with his Precious Treasure.

The relic was hidden before Longinus was killed and was miraculously found in 804 when St. Andrew revealed to a beggar in a dream the very spot where the relic was. From then on Popes, Princes and Emperors came to worship the Precious Blood. 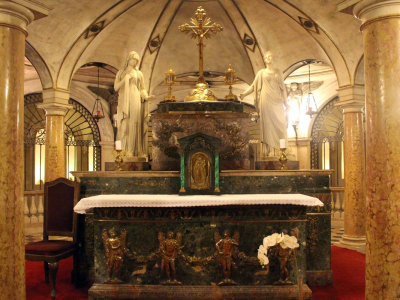 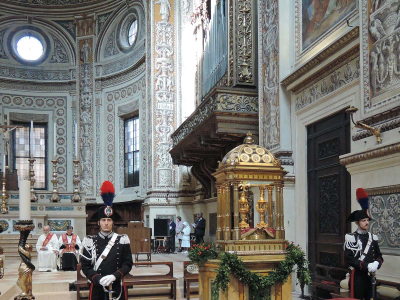 In 1472 Ludovico Gonzaga commissioned a new imposing Basilica and the task was given to the famous architect Leon Battista Alberti who unfortunately died soon after the project, so the works started under the supervision of Luca Fancelli. St. Andrew’s Church is a superb example of Renaissance architecture, but it took almost three hundred years to complete it.

The big dome was added at the end of the 18th century by Filippo Juvarra. The interior has got a long nave covered by a barrel vault with side chapels. The architecture is very solemn and well balanced among the various parts. Some proportions based upon the figures of the square, the circle and sphere include the concept of perfect harmony that can be perceived by the human eye.

St. Andrew’s is one of the largest churches in Europe, over a hundred meters long. Today the relic is kept in the Crypt under the dome and can be seen just once a year, on Good Friday afternoon, when it is taken along the streets in Holy procession. The 18th century decoration of the basilica carried out by Giorgio Anselmi and Felice Campi has been recently cleaned up and the inside now looks much brighter. 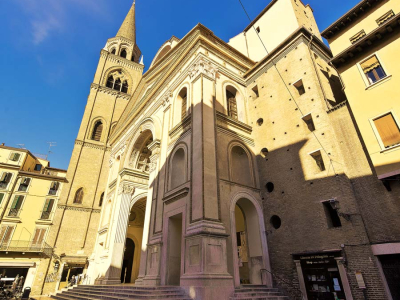 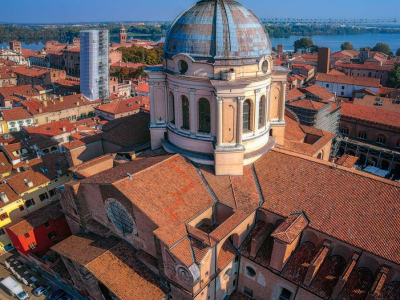 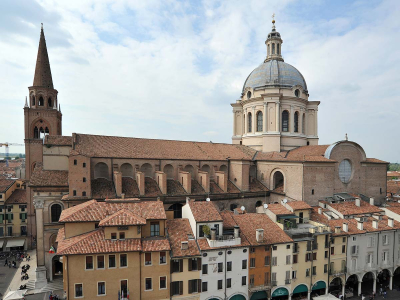 In the chapels (six on each side of the nave) many 16th century works for the most part by the school of Giulio Romano and a beautiful wooden altarpiece by Anton Maria Viani (end of 15th – beginning of 17th century). The body of the great painter Andrea Mantegna (1431-1506) lies in the first chapel on the left.

The chapel, dedicated to St. John the Baptist was probably projected by Mantegna himself but painted by pupils and Correggio who painted the vault. His son Francesco Mantegna was also involved in the paintings. The Holy Family that can be seen by the central wall was painted by Andrea and Francesco Mantegna together. On the left -hand side of the wall a bronze bust portraying the Painter is accompanied by a Latin inscription celebrating the man that had immortalized the splendor of the Gonzaga family. The façade, once polychrome, consists of three parts: in the center a large arch recalling the triumphal roman arch; on the outer parts the space is underlined by niches and windows while a pediment links the elements together.

The vestibule recalls that of the roman temples and has a fine coffered-like ceiling. On the side of the façade the elegant bell tower built in 1413 in late gothic style. From the vestibule a narrow passage by the bell tower leads to a small square with the lateral entrance to the basilica and the rests of a Benedictine monastery, when the church was still managed by the monks. 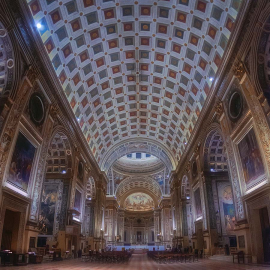 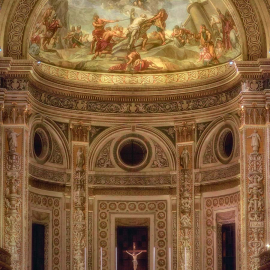 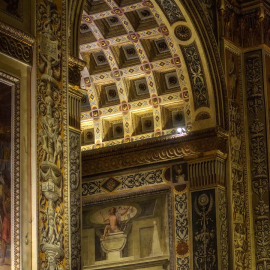